Colosseum Jakarta presents
AVA NIGHT (AVA Recordings )
with Omnia // Somna // Rinaly // DJ LTN + more
One of the trance scene’s best loved record labels, AVA Recordings has amassed a wealth of quality music over 10+ years. Under the watchful eye of Grammy nominated artist Andy Moor and Somna, the label has seen over 200 releases with multiple awards and chart success. Celebrate a decade of music with the full AVA Recordings brand, combining an audio / visual experience curated by our talented artists and special guests.
Featuring
Omnia (Ukraine)
Without doubt one of the most exciting and fast rising names to emerge from the progressive & trance scenes in recent years is Ukrainian DJ / producer Omnia. Having jumped into the Top 50 of the prestigious DJ Magazine Top 100 DJs poll at #48 at the end of 2013, Omnia has continued to make a name for himself as an in-demand producer and globe-trotting superstar.
As a DJ, Omnia’s rise has been as impressive as his producer status, with performances including festivals such as Tomorrowland, ASOT, South West Four, Electronic Family, Trancemisson, Electrocity, Trancefusion and Only Open Air around Europe, World DJ Fest, Escape Halloween and Enchanted Valley Carnival in Asia, plus leading venue and event brands the world over such as Ushuaia, Cream and Privilege in Ibiza, Papaya in Croatia, Ministry Of Sound in the UK, Zouk Singapore, Octagon Seoul, White Party Hong Kong, Exchange LA, Foundation Seattle and Bal en Blanc Montreal and many more besides.
Somna (Canada)
As one of Canada’s leading Trance artists, Somna holds the #65 spot in the DJTOP100 (TrancePodium 2018) making him the only Canadian within the top 100. His music can be found on the biggest trance labels in the world including Armada Music, Future Sound Of Egypt, AVA Recordings, Black Hole Recordings and Perfecto. One of few trance artists bypassing over 100,000 monthly listeners on Spotify, Somna’s music regularly finds itself on the playlists of Armin Van Buuren, Above & Beyond, Markus Schulz, Ferry Corsten, Gareth Emery, Andy Moor and more.
Rinaly (Japan)
Rinaly is a Japanese music producer and DJ and one of AVA White’s resident artists. Finding fame outside of her native Japan, Rinaly can easily be recognized as one of the DJ/Producers with the most momentum in the Trance scene as evident by her Beatport #1 with “Waves Of Affection” and the A State Of Trance supported single “Astrology”.
Supported by DJ LTN DJ Trilions
Visuals: FragmentPXL + special guest VJ AKIKO (Japan)
RSVP 0216909999 – 082270001001
WEB www.colosseum.id 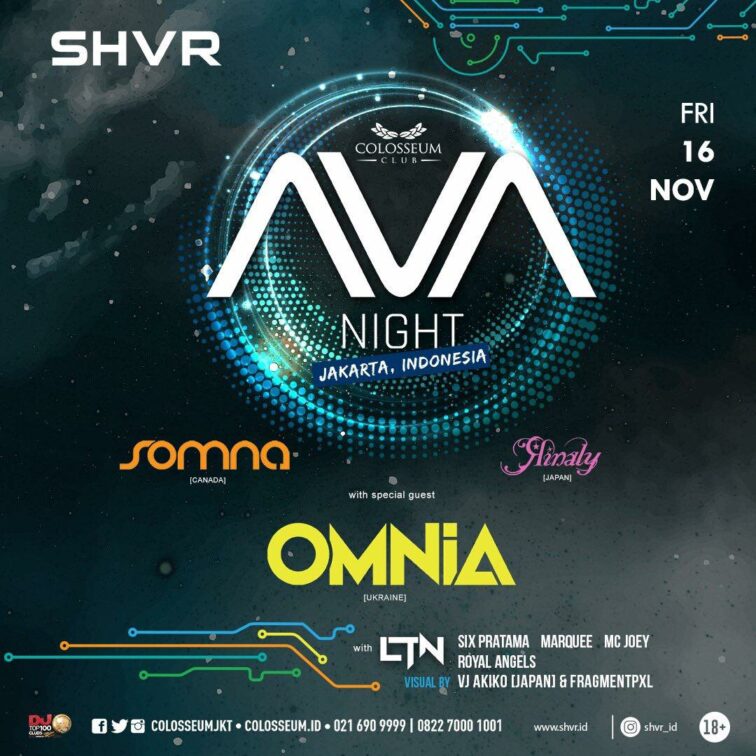